For pumping applications, Orenco’s A, S, and DAX series of standard electromechanical control panels are designed for functions such as pumping from point “A” to point “B.”

Simplex Alarm Panels are a low-cost option for control of one motor. The A series panel is designed to control a low-horsepower simplex motor and alarm system. Motor power switching is handled directly by the input switch, which must be motor rated. Options are limited. 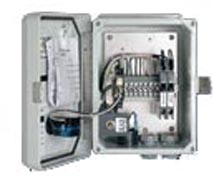 S series control panels are a popular choice for a simplex motor and alarm system. These panels include a motor contactor, which increases system life by reducing the load requirements on the input switches. S series panels also have separate “on” and “off” controls for the motor and can accommodate motors up to 1hp at 120 VAC or 3hp at 240 VAC

Duplex control panels can be used in systems that require two motors operating in alternation, as in pumping operations. The panel can run both motors simultaneously when demand is high. 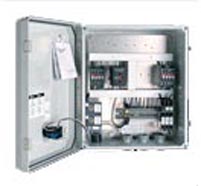 Orenco’s SSF series of sand filter control panels can be used to control two pumps in a sand filter treatment system, when pumping from point “A” to point “B” (first pump) and then from point “B” to point “C” (second pump). Interlocked controls prevent the upstream pump from running if a high-level alarm condition occurs downstream.

These panels include motor contactors, which increase system life by reducing the load requirements on the float switches. SSF series panels also allow options such as a programmable timer and use of larger horsepower pumps, not to mention more flexibility in drawdowns. In addition to sand filters, the panels can be used in other applications that require interlocked control of pumps or other. 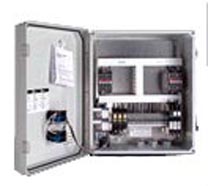